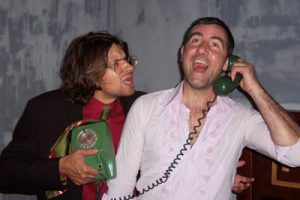 Colin must be comforted in his grief over the death of his fiancee, so his friends, who never met the girl, arrange a tea party for him. Understandably they are on edge wondering what to say, but there is more to their unease: Diane and Paul, John and Evelyn, and Marge and her husband, who is perpetually out of circulation with trivial illnesses, are all kept together by a mixture of business and cross marital emotional ties. By the time Colin arrives for tea, their tenseness contrasts dramatically with his air of cheerful relaxation. He is the only happy one among them and his happiness and insensitive analyses of their troubles causes each of them to break down.