Erith Playhouse celebrated 50 golden years of productions in 1999 and remains an established part of the Bexley arts scene sixteen years later, but if it were not for a group of dedicated individuals and a lot of hard work, it would not be in existence today.

The current building is quite different from the original ‘Oxford Cinema’, although the auditorium is still original. Opened on 27th July 1913 to show silent movies, the cinema was a simple brick box with a screen painted on the far wall and doors either side of the pay-box straight onto the street. It operated as a cinema until 1938, then closed, re-opening briefly as a news cinema. Throughout the Second World War it was a repository for furniture from bombed homes in the area. 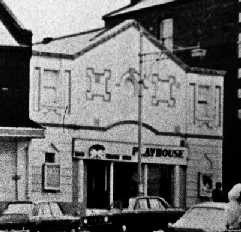 It was at this time, during the last war, that amateur and professional theatre groups were encouraged to provide ‘Holidays at Home’ – entertainment arranged for local communities in school halls and other places. The groups in Erith provided as much entertainment as possible in spite of the bombs and transport problems until Erith Borough Council (as it was then) appointed the late Harry Clayton, Borough Engineer and Surveyor, to organise the entertainment programme.

Clayton felt that the co-operation between local groups should be put on a more permanent basis. To this end, a public meeting was called on 1st March 1943 to explain his ideas of bringing all devotees of amateur theatre into a Civic Drama Society. Unable to attend the meeting due to illness, one such devotee was the late Gill Dyer whose ideas were presented by the late Rex Reed. Mr Dyer’s ideas were accepted and due to the hard work of those three men, the Erith Theatre Guild was formed that year.

Although its own theatre was still a number of years away, the Guild worked towards a greater degree of co-operation between the affiliated groups and mounted an annual production – the first of which was ‘Berkeley Square’ in 1944. Plays continued to be produced in school halls, at Electricity House (which now houses the snooker hall and shops) and even on tour in hospitals, service stations, gun sites and barracks.

By the end of the war it was possible to consider working towards a real theatre for the Guild. The enthusiasm of the members had been proved and although materials of all sorts were in short supply, the Guild obtained a lease for the Oxford Cinema from Erith Borough Council. Now the real work would begin…

The conversion of the old cinema started in 1947 and was finally finished on Saturday 1st October 1949 – the day the first production opened. The scale of the project and those two years of hard work can only be imagined by those of us too young to have been there with most of the work being carried out by ‘building amateurs’ in the evenings and at weekends. Equipment had to be begged and borrowed and even the timber was second hand – with every nail having to be painstakingly removed!

Two areas were cut through the side walls of the then cinema screen to provide wing space and access to the dressing rooms and scene dock, all of which were outside and consisted of old army huts. An area was also excavated to provide a basement for storage and orchestra pit which we still use today.

The ground floor of the adjoining property – 38 High Street – was leased to the Guild. The upper floors were later to become a wardrobe and props store, but on opening they were still tenanted.

After the opening ceremony conducted by the late Dame Irene Vanburg, the curtain rose on the first play ‘Yellow Sands’ (written in 1926 by Eden and Adelaide Phillpotts). No sooner was the hard work completed to open the theatre and the dream realised, it became apparent that as much hard work would be needed to keep it open.

Audiences were small and the debts were large, which made the first years difficult ones. With a loan from the Borough Council, finances were improved, but of the original thirteen societies affiliated to the Guild, by 1955 only three remained in existence. This forced the Guild to experiment and present its own plays – a move that was to set the path for the future.

The Guild was reorganised to reflect these changes and by now audiences had grown, enabling the loan to be repaid and profits to be ploughed back into the theatre. Things looked brighter, but more problems were to be just around the corner with plans to build an ‘Erith Town Centre’, the creation of the Greater London Borough of Bexley and new fire regulations. But all were overcome to take the theatre through to its next phase of development.

In the late 1960s Erith was changing rapidly and after the uncertainties of what would actually happen to the theatre on 3rd December 1969 a letter was received from the local authority stating that the Guild would be granted a 21 year lease on the buildings on the condition that improvements were made.

This news spurred the members forward and much planning needed to be done. One of the members, the late Bob Pettyfer, made a sketch of how he envisaged the new Playhouse to look – it was the beginning of the building which stands today and did not look that dissimilar.

On the 18th July 1972 the Guild received its new 21 year lease and the dream started to further unfurl.

The dream was costly, £75,000 for building and renovation. The members had already done whatever they could to raise money; sold jumble, held sponsored walks, stitched, knitted and sewed, whilst still managing to entertain audiences. In seven years by their hard work and the generosity of so many people, the members had accrued £11,000. There was some begging and borrowing culminating with the Greater London Borough of Bexley generously giving an interest free loan of £40,000 and with the remainder of the rebuilding cost matched equally between the Guild and the Borough.

In November 1972 the Playhouse closed its doors after 361 shows for rebuilding work to begin. The heart of the theatre, the original ‘Oxford’ auditorium plus the stage were to remain in order to retain the intangible theatrical atmosphere that had existed for so many years. The weeks passed and the old exterior buildings demolished, cleared and the new foundations laid. On 14th April 1973, E. M. Bennett, Chief Executive of the Borough, ‘tapped’ the foundation stone into place. The new Playhouse was growing. During this time the members toured with a travelling ‘Music Hall’ to continue raising funds and to enable them to perform. It proved so successful and enjoyable that it continued for several years after the re-opening of the theatre.

At last, after months of mounting excitement, the Playhouse re-opened its doors on 1st December 1973, the ceremony being performed by the Mayor of Bexley, Councillor Alf Turner. The new Playhouse remained open all that day for visitors interested in viewing the building but it was not until January 1974 that the curtain rose on ‘Cinderella’, its first production on stage since its closure 14 months earlier.

Since its rebirth the Playhouse has been administered by the Erith Theatre Guild Ltd as a registered charity (nobody gets paid) and the proceeds from all productions are ploughed back into the life and upkeep of the theatre. Over the years the Guild has spent far in excess of the original rebuilding cost to continually improve the facilities. Land has been purchased at the rear of the building and a scenery store built. Reconstruction of the rear and side stage passageways, over-stage walkways, sound systems, lights and lighting control equipment, are just a few of the projects that have been undertaken. This is apart from the everyday costs of maintaining a theatre with a public performance licence. Remember, any passer by can walk off the street into the foyer on a performance night and purchase a ticket to watch the show – just as if they were in the West End! It is almost 25 years since the auditorium was last re-seated with the aid of a Green Shield Stamps donation scheme.  In 1999 the seating was replaced again but this time from Guild funds.

Another 50 years have almost passed and Erith as a town has again altered. The new supermarket complex on the old wharf site has opened up the theatre to the River Thames with an impressive walkway at its rear. Traffic again passes the theatre’s front doors and some people daily see a theatre they never knew existed until recently. 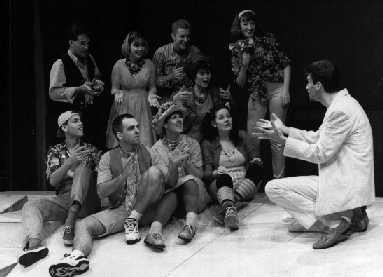 Currently the Playhouse produces some 13 shows per year. Second and third generations of some of the original theatre members now take an active part in its life and with them passes the founders ‘original dream’ that amateur live theatre will continue in Erith.