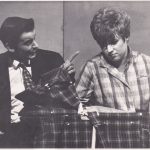 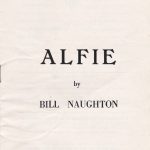 The ultimate amoral “swinger”, Alfie swaggers and philosophizes his way through a parade of ‘birds’ in 1960s London, allowing the audience to eavesdrop as he goes. When one carefree entanglement proves too close for even Alfie’s comfort, the “swinger” lands with a thud. A hit in London, this story became a classic film that made a star of Michael Caine as the title cad.