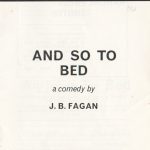 This historical romp finds diarist and ‘father of the Admiralty’ Samuel Pepys rescuing lovely singer, Mrs Knight, from a violent pick-pocket, then slyly arranging a musical tryst with her that evening. His dinner guests include young francophile dandy, Pelham Humphries, and brazen Mrs Pierce and Mrs Knepp, but Pepys declares he has urgent business at the Navy office. His attractive wife sees him dress up, and knowing his ways with women, doesn’t believe his story. When she finds the note with Mrs Knight’s address she pursues him.

Meanwhile, her amorous husband is using all his flowery lines on Mrs Knight when her former lover King Charles II arrives. Sam is forced to hide in a chest where he hears little good of himself. Then it’s Charles’s turn to hide as Mrs Pepys arrives, ranting and raving after Samuel, but she’s brought to heel upon discovering not Sam, but his Majesty, behind a curtain. Charles, the archetypal ladies’ man, flirts with Mrs Pepys before sending her home, then demands that sulking Mrs Knight open the chest. Charles and an uncomfortable Sam lecture each other, but upon leaving Sam forgets his flageolet (a musical instrument) which Charles then sends to Mrs Pepys; now both know what the other has been up to.

Back home Sam and wife confront one another with various accusations, protestations and extractions of mutual promises of fidelity. It is now past midnight, their adventures are over… and so to bed.