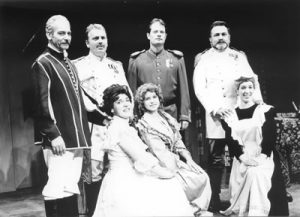 In 1885, after the Battle of Shirnitza, the Serbian Army is in flight from the victorious Bulgarians. A fugitive officer takes refuge in the house of an ancient Bulgarian family by climbing up to the bedroom of the play’s young heroine. Written as an ‘onslaught on idealism’ Shaw’s comedy in three acts views the eternal conflict between romantic and realistic morality.