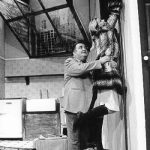 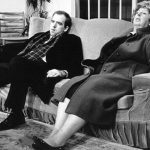 Corrie and Paul are newly-weds who have just moved into their cold, eerie apartment in New York. Corrie is starry-eyed, Paul less so after staggering up five flights of stairs. Their house seems to be populated by unusual people, the most bohemian being Victor whom Corrie finds entertaining. Corrie tries matchmaking between Victor and her lonely mother but after a disastrous dinner party she learns that walking barefoot in the park may not necessarily denote joie de vivre — in February it is simply silly!