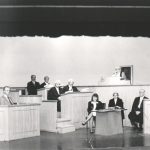 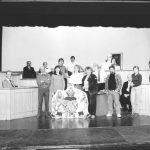 Jeffrey Archer’s first stage play. In the Central Criminal Court, the Old Bailey, Sir David Metcalfe, distinguished QC and Chairman of the Bar Council, is conducting the most important defense of his career – his own. Accused of the willful murder of his terminally ill wife, Sir David finds himself locked in legal combat with his old rival, Sir Anthony Blair Booth QC, prosecuting counsel. After a tense and gripping courtroom scene, Act I ends just as we are about to hear the jury’s verdict. Act II takes us back in time to the fateful night of Lady Metcalf’s death and before, and the play ends with a surprising twist.