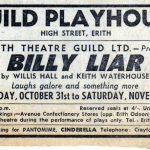 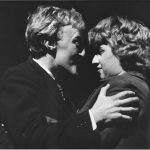 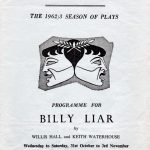 A teenager in a North Country town, Billy Fisher weaves a world of his own out of his day dreams. He is an incurable liar, idle and dishonest, and to escape from his dull job as an undertaker’s clerk and his dreary domestic background he imagines himself in so many different situations that truth and fiction become hopelessly intermingled. His family is unable to understand or control him, though they realize that he is a good for nothing. The cast is completed by the three girls to whom he is simultaneously engaged. When he is given the chance to start a new life, he turns it down, preferring his dreams to reality.

Furniture loaned by Bonners of Welling