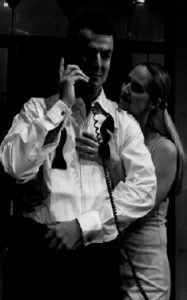 Womaniser Mike Mason, star of TV’s ‘Bargain Basement’ and his wife Liz were involved in a hit and run accident in which a young teenage girl Carol Mitchell was killed. They believed they have got away with it until seven years later they receive a call from someone claiming to be the dead girl. Returning home that night from an award ceremony, the couple find their house trashed and the name ‘Carol Mitchell’ painted on the wall and so the nightmare begins. After a roller-coaster ride of twists and turns the play finally reaches its dramatic conclusion as the full shocking truth of Carol Mitchell’s death is revealed.