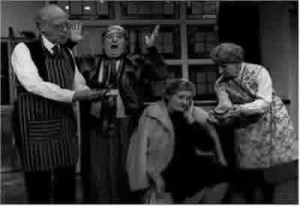 When Dame Beatrice is given a mink stolen by her maid, she is reminded of the maid’s shady past and immediately suspects that it was stolen from the the next flat. A former army officer and other lodgers endeavour to return the mink. The plan is devised with care and all of them take such delight in the secretive scheme that they wonder why they don’t do this more often. They form a syndicate for stealing and returning furs. Everything goes well until a loss is reported and the police come charging in. The maid is horrified to discover what has been going on behind her back, but agrees to employ her talents to bail the amateurs out of trouble if they agree to never touch another fur. She succeeds, the police leave, and life returns to its humdrum ways until someone remembers that it was only furs they had promised not to touch!