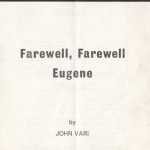 How do you say “farewell” to someone who never appears in the first place? Let the action speak for itself; the time is 1915, the place a shabbily genteel basement apartment on Manhattan’s Lower east Side. Its denizens are Gert and Minnie Povis, the former quite correct and slightly formidable, the later not above sneaking a clandestine bottle of beer or reliving her brief but happy days as a member of a third-rate opera company. The sisters supplement a small income by turning out handpainted greeting cards, which Cousin Peonie merchandises through her acquaintances in the “outside world.” One of these is Chuck Bailey, who is in love with Poenie but out of favor with Gert. He does move a lot of greeting cards, however, which means more money for the growing fund in the “Visit to Eugene Box.” Brother Eugene, we might add, has been off in Africa for a rather long time doing nobody knows what… 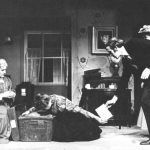 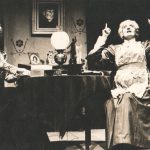 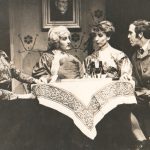