Half a Sixpence
Book by Beverley Cross, music and lyrics by David Heneker
From the novel “KIPPS” by H.G. Wells
Directed by Colin Burring
9 – 14 July 2001 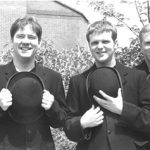 Half a Sixpence is essentially a love story about Kipps, an orphan apprentice, and his childhood sweetheart, Ann. But the path of love does not run smoothly. Kipps comes into an unexpected fortune which goes to his head as he tries to move into a higher social circle. He returns to his roots with a happy ending!