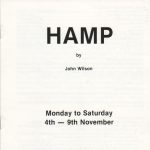 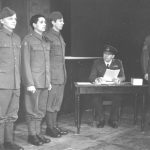 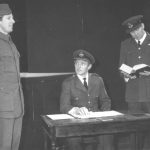 Private Hamp is a nonentity, a creature whose undistinguished simplicity borders on simple-mindedness. The primitive machinery of war has plucked him from the grime of a Lancashire mill town and flung him down in the bloodsoaked mud of Passchendaele so that he may enjoy the privilege of meeting an unceremonious death in the service of his native land. But when one day Hamp scrambles out of a shell hole and walks away from battle, the Army finds itself compelled to notice his existence. He is court-martialled for desertion in the face of the enemy. The guards, the lieutenant who acts as his defending counsel, the padre – all try to make him realize that the court could insist on the maximum penalty. Obtusely, Hamp has utter faith in his counsel’s power of words and in the fact that everybody is really too busy with the war to trouble about his insignificant crime. But it is decreed – there is “a danger of rot setting in”. Hamp is rendered insensible with rum and morphia and carried out, strapped to a chair, to meet a death as unceremonious as the Army can make it.