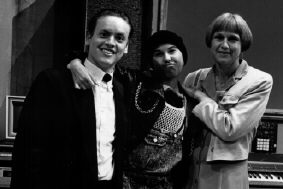 England’s comic master is in black comedy mode in this West End hit about our fascination with technology. It is set sometime quite soon in a steel shuttered, slovenly flat in a no-go area of North London where punks rule deserted streets. Here, a lonely composer sits surrounded by high-tech equipment. His only company is a robot nanny, and she’s on the blink. He desperately wants to reclaim his teenage daughter and enlists an out of work actress to implement a cunning plan he’s evolved to impress his estranged wife and a wired for sound child welfare officer. When things don’t work out, Jerome has to improvise. It’s amazing what can be done with new micro chips and a screwdriver!