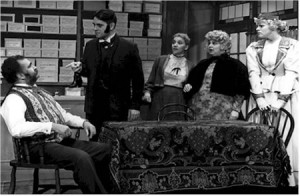 The youngest daughters of curmudgeonly bootmaker, Hobson, are anxious to marry and have eligible suitors, but must wait until eldest daughter, practical-minded Maggie is promised in marriage. Maggie, however has other plans which include freedom from her father’s tyranny, a business and husband of her own. Her choice: Hobson’s shy apprentice Will Mossop.