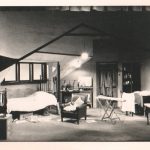 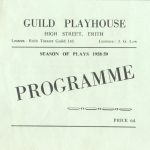 Jimmy Porter, frustrated and bitter in his drab flat, lives with middle-class wife Alison. Also sharing the flat is Cliff who keeps things tenuously together. Alison’s friend Helen arrives and persuades her to leave Jimmy only to fall for him herself. When Alison becomes pregnant Helen leaves them together. This play originally opened at the Royal Court Theatre in 1956 and has since proved to be a milestone in the history of theatre.