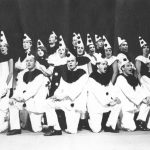 Oh, What a Lovely War! is an epic musical developed by Joan Littlewood and her ensemble at the Theatre Workshop in 1963. It is a satire on World War I, and by extension on war in general. The title is derived from the “somewhat satirical” music hall song “Oh! It’s a Lovely War!”, which is one of the major numbers in the production.