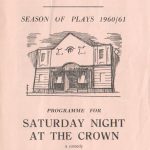 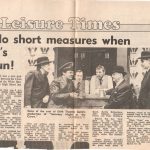 Adaption of Greenwood’s final novel Saturday Night at the Crown, set entirely in a Manchester pub over the course of a single day. Its urban, wholly working-class setting makes it quite easily comparable to his pre-war fiction. It follows the fortunes of the landlord Harry Boothroyd, the barmaid Sally Earnshaw, the cook Maudie and a number of customers including the dominant Ada Thorpe and her husband (who does not get the chance to speak for the entire course of the play), her son Bert Thorpe and his new girl-friend Jean McLean, the extended Hardy family, who have hired a room after the funeral of the clan’s mother, old Mrs Hardy, and a group of US troops from a nearby base. This is a story notably set in a new world of fifties working-class prosperity.