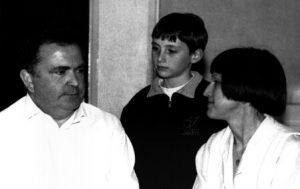 From left to right. John Hart and Jan Pearce.

This West End and Broadway hit is the love story of C.S. Lewis – Oxford don and author of The Chronicles of Narnia and The Screwtape Letters – and American poet Joy Davidman. Jack Lewis is smug in his convictions about God and His plan for the world until Joy and her young son enter his life and the bewildered theoretician of love in the abstract finally confronts its direct presence.