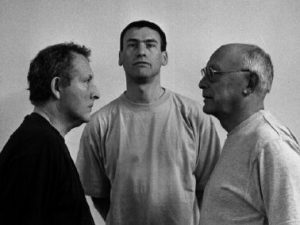 An American doctor and an Irish journalist are being held captive by terrorists in Beirut. They exercise and they argue, supportive in their mutual determination to survive. They are joined by an English academic. The three display their national biases and prejudices, which are intensified in the cramped confines of their cell. As time passes, resentments and recriminations give way to an acknowledgment of their characters, strengths and weaknesses. They learn that humour is their surest weapon against their captors and the safest armour with which to protect themselves. They shoot imaginary films, they throw a big party for each other, they play a fantastical game of tennis, they laugh at and with each other, and they learn to lament what was lost in their lives before captivity. Each comes to know himself through listening to the stories, sorrows and joys of the others. At the end of the play, they are capable of standing together and alone.