Stop the World – I Want to Get Off
Book, Music and Lyrics by Leslie Bricusse and Anthony Newley
Directed by T.Hadley Prestage
Chorus Movement devised by Doreen Sackman
Musical Director – Leslie Mackay
5-12 June 1965 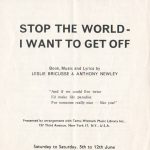 The show, set against a circus backdrop, focuses on Littlechap from the moment of his birth until his death. Each time something unsatisfactory happens, he calls out ‘Stop the world!’ and addresses the audience. After being born, going through school, and finding work as a tea-boy, his first major step towards improving his lot is to marry his boss’ daughter, Evie, after getting her pregnant out of wedlock. Saddled with the responsibilities of a family, he is given a job in his father-in-law’s factory. He has two daughters, Susan and Jane, but truly longs for a son. He allows his growing dissatisfaction with his existence to lead him into the arms of various women in his business travels—Russian official Anya, German domestic Ilse, and American cabaret singer Ginnie—as he searches for something better than he has. He becomes rich and successful and is elected to public office. Only in his old age does he realise that what he always had, the love of his wife, was more than enough to sustain him. But Evie dies, and Littlechap comes to terms with his own selfishness while writing his memoirs. At the moment of his death, he watches his second daughter give birth to a son. When the boy nearly dies, Littlechap intervenes and allows Death to take him instead. He then mimes his own birth, beginning the cycle once again.