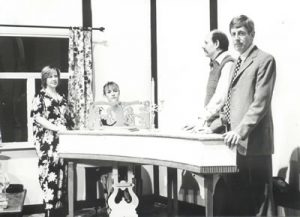 Dan and Margaret have come to spend Christmas with Rachael and Edmund in their newly renovated 17th Century labourer’s cottage. Margaret gives them a present of a primitive African wood carving, depicting a woman in childbirth – a fertility symbol. Rachael, who loves Baroque music, has been given a Christmas present of a harpsichord from Edmund. Later as she plays, she suddenly gets a sinister feeling of Déjà vu. Shortly afterwards, all the electricity fails. A power cut? Perhaps, but the phone is also out-of-order. This sets in motion an unstoppable series of macabre events, which mount to a terrifying climax.