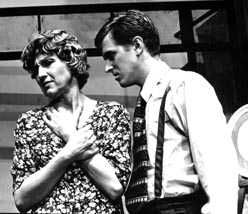 Set in St. Louis, Missouri, Tom narrates the play by mixing the past of the 1930s and the present of 1945. The story is told through his memories of certain but critical events which affect the family.

His mother, Amanda Wingfield, obsessed with her past life as a Southern Belle, is desperate to find a ‘gentleman caller’ for her crippled, shy daughter Laura. Tom himself is creative but stifled by having to work in a warehouse and also by his mother’s domineering personality.

First produced on Broadway in 1945, The Glass Menagerie won the New York Drama Critics Circle Award for best play of the season, and was to become Tennessee Williams’ first success. This has since been followed by further acclaimed plays like ‘Cat on a Hot Tin Roof’, ‘A Streetcar Named Desire’ and ‘The Rose Tattoo’.