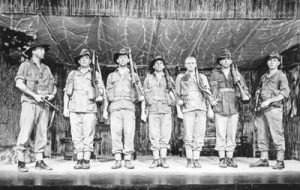 Issues of loyalty and danger arise in this strong play of British Soldiers in 1942. A lack of enthusiasm for even being there helps the comedy unfold during the early scenes. Set in the Malayan Jungle with the Japanese some twenty miles to the north and held by the British army, this rookie patrol had little to worry about or so they think.