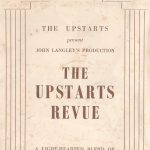 A light-hearted blend of comedy and music, this was The Upstarts’ 19th production at the Playhouse.