Tom Jones
Written by David Rogers, from the book by Henry Fielding
Directed by
1968 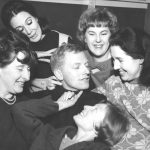 This play captures the skylarking spirit of Fielding’s comic masterpiece, and it’s a hit with high schools, colleges and stock. It’s set simply in drapes with a few props. Young Tom Jones, foundling and ward of Squire Allworthy, is deeply in love with Sophia and she with him, but her father has arranged for her to marry the Squire’s sneaky nephew (and heir), young Blifil. The romance is discovered, Tom is banished and Sophia, with her maid, Honour, sets out to find him. They are followed by Sophia’s father, his sister, Squire Allworthy and Blifil. All find madcap adventures on the road to London and meet with many strange characters. The amusing and unexpected solution to their problems captures all the laugh-a-minute hilarity for which Tom Jones is famous.