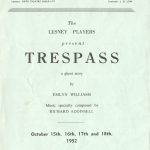 Is it really possible to bring a loved-one back from the dead? Christine certainly believes so and has already engaged various mediums in unsuccessful attempts to restore her recently dead, much loved husband, to life. But undeterred by failure, she has now invited Saviello, an Italian medium with a reassuring record of success. Yet is he what he appears to be? And what about his down-to-earth ‘manager’ Mrs. Amos? A ghost story.