Why Not Stay for Breakfast?
Written by Gene Stone and Ray Cooney
Produced by Pauline Fielder
Directed by Bill Fielder
21 – 26 May 2001 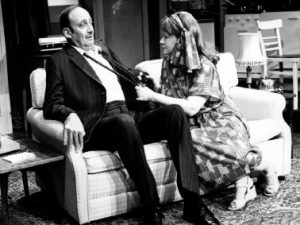 George Clarke is a civil servant, a respected member of the Establishment, once married, now on his own. He lives in a flat in a converted Hampstead house. The apartment above is inhabited by hippies, and their noise often disturbs his peace. One evening young Louise Hamilton arrives on his doorstep. She has had a row with young Davey in the “pad” upstairs. She is also very pregnant. The clash between the happy and the square types is at full strength when Louise suddenly starts labor pains. George takes charge, the baby is born, and both it and Louise remain in the flat for the time being. Gradually their relationship deepens, and despite many crises a bridge seems to have been built between a drop out from, and a member of, present day society.